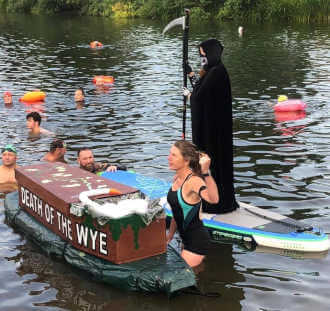 The Health of the River Wye

Angela Jones is called the swimming detective, as she has an intimate understanding and knowledge of the flora and fauna of the Wye, recording and observing all the changes to the river environment. She plays a significant role in safeguarding the river’s future and highlighting the decline in species and habitat loss.

She is a strong campaigner for Cleaner Rivers working tirelessly on gathering information and data and holding those to account who disrespect our natural resources that nature so kindly shares with us.

Writing and Appearing on many pollution programs Panorama and recently with George Monbiot on Programs such as Rivercide the girl with the wooden spoon ( who runs her business from her phone and no home internet ) known as the Wild woman of the Wye refuses to allow the Death of her beloved River Wye by holding to account the many Contributors who Pollute and Use the Wye as an Open Sewer.

Come along to the The Town Steps (next to the Monmouth Rowing Club) at 6:00pm on Wednesday 22nd September and hear a talk from Angela Jones on the River Wye – a lifetime of swimming (and pollution problems).

Sadly, we will not be able to swim in the River this evening due to recent pollution reports.